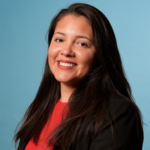 Ms. Cochran has worked in the field of immigration since before law school and has represented individuals in matters involving waivers of inadmissibility, family-based and humanitarian petitions, detention and bond proceedings, and federal court litigation. She has also offered advice on several media outlets (including Telemundo Atlanta, Mundo Hispanico, Fordham University Radio, and CNN Español) and at several immigration forums and events throughout Georgia.

Ms. Cochran is a member of the American Immigration Lawyers Associations (AILA) and the State Bar of Georgia. She is admitted to practice in the U.S. District Courts for the Northern and Middle Districts of Georgia and the Eleventh Circuit Court of Appeals, where she has successfully litigated and delivered oral arguments on a pro bono asylum appeal.

In her off time, Ms. Cochran enjoys traveling, writing, and running. She is fluent in Spanish and conversational in French.