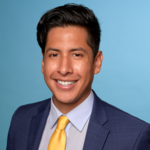 Julio is a proud Peruvian National, and comes to Vazquez and Servi from the Tar Heel State, North Carolina. He received two Bachelor of Art degrees in Political Science and in United States History from the University of North Carolina at Chapel Hill (2017). However, 4 years in the paradise of Chapel Hill weren't enough. Immediately after his undergraduate studies he ventured on to receive his Juris Doctor from the University of North Carolina at Chapel Hill School of Law (2020). There he attained notoriety for his oral advocacy skills. He was one of the primary closers for the Broun National Trial Team, and served as the team's closer in the TYLA National Trial Competition in which they reached semi-finals. He was also one of 4 members in the International Moot Court Team which competed in the International Jessup competition – one of the world's most prestigious Appellate Advocacy competitions.

His primary focus has been in Criminal Defense. Throughout his time in law school, he interned and externed at the Office of the Capital Defender where he worked exclusively with those charged with capital offenses, the Wake County Public Defender's Office where he expanded on his oral advocacy skills by representing indigent defendants in state court proceedings, and Matheson and Associates, a staple Criminal Defense Firm in Raleigh, North Carolina.

He is a member of the North Carolina Bar, and joins us as an associate attorney. Julio has an ardent drive to protect and serve the community from injustices created due to inequality and inequity perpetuated by a lack of accountability in the justice system.

New to Atlanta, during his free time he can be found exploring outdoor breweries, looking for the best places to eat, sparking up new conversations on the beltline, and hiking with his puppy, Ava. He is thrilled to get to know Atlanta, and has a passion for soccer, singing, guitar, and dogs.