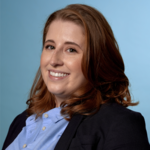 Ms. Correa-Jamison is an Atlanta-raised Colombian. She graduated from the Georgia Institute of Technology with a Bachelor of Science degree in International Affairs and Modern Languages (2015). She is a graduate of the Georgia State University College of Law (2020), where she received accolades for her work in Public Interest Law and Policy Work, as well as her dedication to pro bono services. In particular, she devoted her studies to the relationship between race, ethnicity, and the law, focusing on community-based advocacy to dismantle oppression in the legal system.